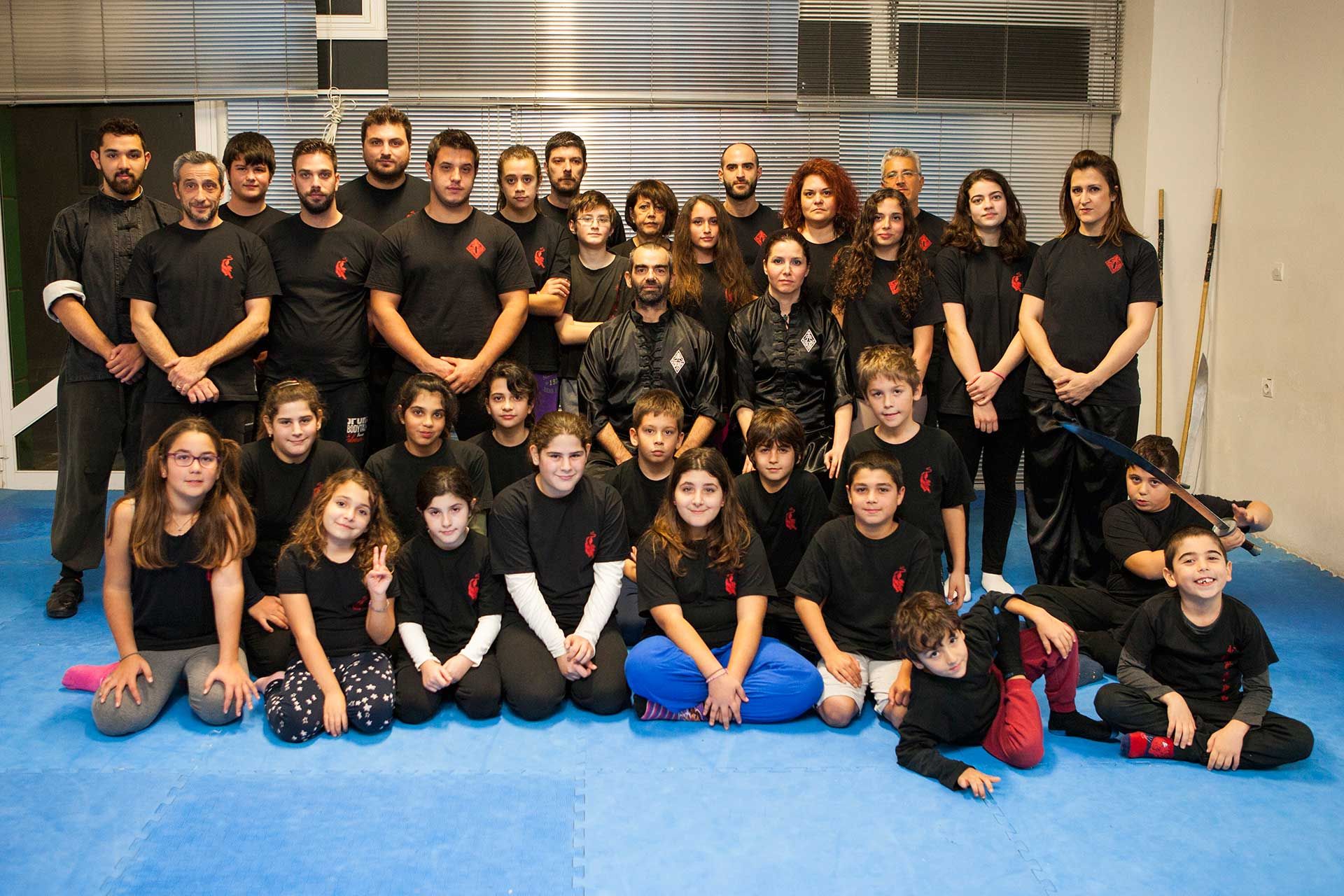 Our school is the Chania Branch of Lam Chun Fai Hung Kuen School who is based in Hong Kong  and also member of World Hung Kuen Association.

In order to learn and practice this art (Hung Kuen) we classify it into six major areas:

6. Moral code for our school

The hand forms are Kung Fu patterns linked together with some specific purposes. In our style we have many hand form sets. They are fundamental element in Kung Fu training. Their primary aim is to enable the student to learn and perform correctly various Kung Fu movements and patterns, to develop his/her power and the body to be gradually conditioned.

2. Applications and Specific Techniques: After the student learns how to perform the hand forms correctly, he must learn how to use them in combat. He should repeat each pattern or movement of hand forms pairing with other students both in attack and defense techniques in order to comprehend how they work. Students should practice a lot the uses of each set so that they acquire the ability to apply the Kung Fu patterns flawlessly when needed. Gradually the applications should be applied with both force and speed.

3. Weapons: One of the most essential parts of Kung Fu is practicing with weapons. Weapons are an expression of Kung Fu heritage, often very impressive to watch. Practicing with weapons is not only more attractive but also helps the student to increase his force, his stamina and the ability to perform the hand forms with more power, speed and flexibility in unarmed combat. For example, the Shaolin students were well known for the excellent use of staff. When a student practices with the staff improves his speed. While the sword adds flexibility to the wrist movement and as a result the student becomes more capable of forcing a grip or avoiding it, and teaches the student the principle of soft versus hard. Learning to use the spear, the student develops the skill of sharpness and piercing which requires trained eyesight, etc. It’s the same procedure as with learning the Hand set form. First the weapon set and then its uses. Also there is a combination weapon’s set, where staff can be paired with sword or spear or Dai Kwan Do or other ones.

The Weapons form sets are:

4. Sparring forms is a combination of set practice and individual techniques between two partners.

5. The Principles of this art are:

- Horizontal and vertical movements (most powerful expressions in Hung Kuen)

- Swallowing (closing) and spitting (opening) of the body

- Importance of controlling the distance

‘The principles of attack and retreat, exit and entry, swallowing and spitting as well as rising and sinking must be practiced daily’, Lam Sai Wing

6. The moral code of our school

- Respect the master and love the fellow disciples

- Don’t interrupt and don’t stop your training. It’s the first stage on your path to mastership

- Continue training for a long time without any hesitation or doubts

- Train in each set (form) diligently for three years

- Concentrate all your force in your fingers

- Your training must be consistent and regular-twice every day for a period of time.

We follow the rules and we are under the supervision of our teacher and current successor of that legendary martial art, Grandmaster Lam Chun Fai.

Grand master Lam Chun Fai, the eldest son of great-grandmaster Lam Cho was born in Hong Kong. Named by his great uncle Lam Sai Wing, he began his Hung Gar training at the age of 5 under the carefull and strict guidance of his father. As a young man he assisted his father with teaching gung fu and treating patients.

He eventually became the chief instructor of the four schools; two on Hong Kong Island and two on the Kowloon side of Hong Kong (one of which was the famed Lam Sai Wing Physical Training School). Later at the age of 18 he opened his own gung fu school and dit da clinic in the North Point of Hong Kong island where he still continues to teach Hung Kuen and treats patients.

Over the years Grandmaster Lam Chun Fai has been invited to perform his family gung fu at countless events, competitions, performances all over the world. In 1985 Lam Chun Fai was invited by Chinato represent Hong Kong as a consultant for the International Wushu Invitational Tournament, which was held in Xi’an . One year later, in 1986, he was invited again for the 2nd International Wushu Invitational Tournament in Tianjin, but this time to join the traditional gungfu competition. At this tournament Lam Chun Faiperformed Fu Hok Seung Ying Kyun and Seung Lung Dou, which won him an award for the most distinctive performance and a gold medal.

In 2004 Lam Chun Fai sifu was asked to represent Hong Kong at the Firts World Traditional Wushu Festival held in Zhengzhou, capital of Henan Province in central China. Grandmaster Lam Chun Fai with his team of 10 students, competed in 18 single and one dual event. Competing against more than 2,500 contenders, each and every single member of the Lam Chun Fai Hung Gar team won a medal in their category, bringing back home 13 Gold medals, 6 Silver medals and 1 bronze. Grandmaster Lam Chun Fai himself also took part in two separate events and won a gold medal in each event.

Grandmaster Lam Chun Fai is often asked to travel all over the world to teach and promote the Lam family Hung Kuen. Over the years, he has frequently been invited to give demonstrations, lead seminars, and teach private classes in many different countries around the globe. 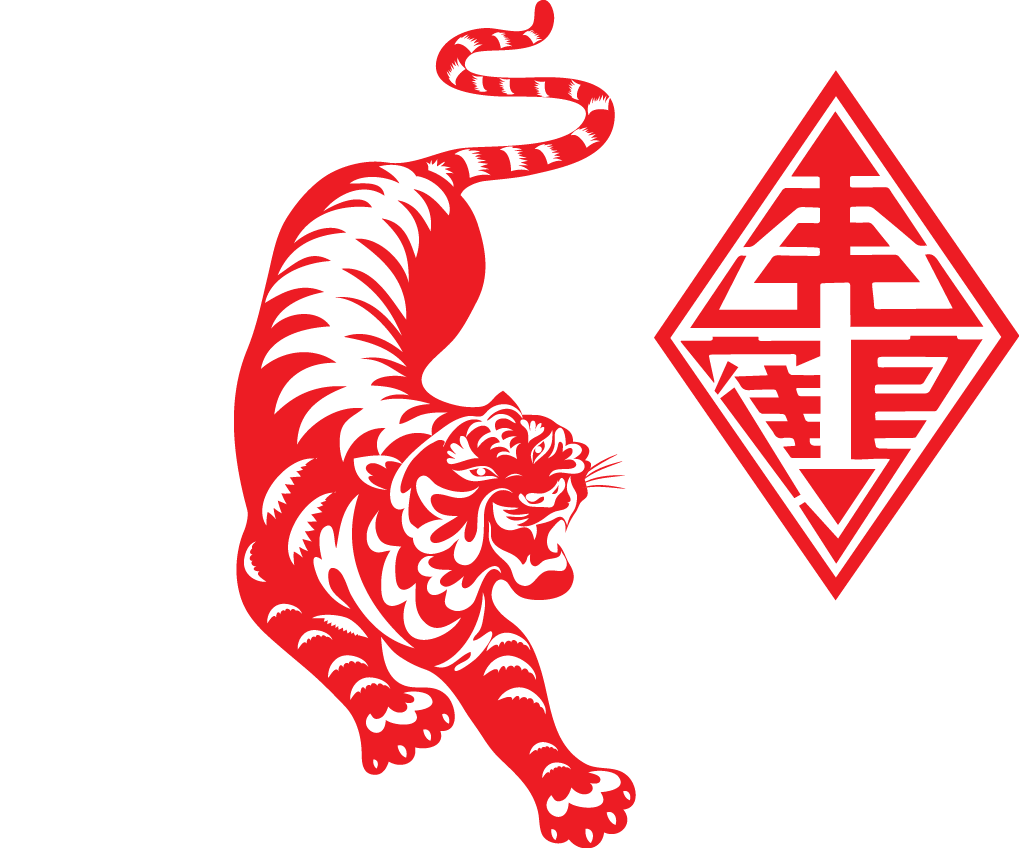